Explainer: What were the performances at Aurat March ’21 all about? 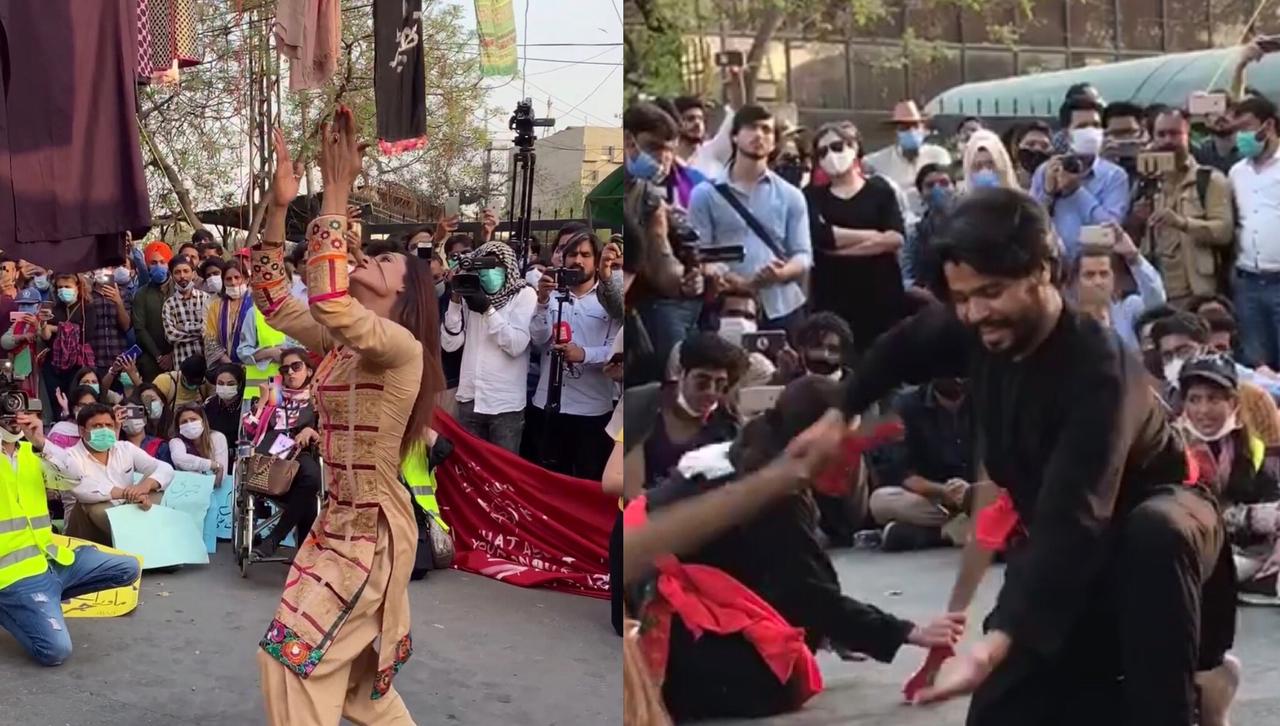 In the words of the organizers this year’s march “seeks to center marginalized bodies.  The hysteria regarding our jisms doesn’t translate into concern for the well-being of our bodies, we decided to do it ourselves.”

The space where the Marchers gathered was lined with hanging kameezes of different women. These garments bring together real-life accounts of women, trans persons and girls, mentioning the age, along with other details, at which they first encountered abuse or violence—in the form of harassment, emotional or sexual violence.

In the words of AM organizers:”Today we talk about these hidden secrets, the stories that were once hidden in shame. It is now society’s turn to feel the shame. We cannot hope to change society without first confronting the worst parts of it.”

The performance by ‘Sangat‘ group with students, artists and activists from across Pakistan to highlight economic injustice, wealth imbalances and other social ills, marked the coming together of women and the lower classes.

Starting off with a middle-aged woman standing in the middle of the crowd and proclaiming that the group had come to do a deep cleaning of the DIRT that exists in our minds and in our hearts as a society, the group did a symbolic dance using “jhaaroos” used in our houses. The performance meant to raise the social status of physical laborers and lowly workers, who have long been under-payed, under-respected and undervalued in Pakistani society, using the ‘jharoo’ as a symbol.

The track used for this dance was a redition of the 18th century Punjabi Sufi poet and saint Bulleh Shah’s kafi (poem) “Main Churrheytri Aan” ( I AM A PEASANT WORKER/ LOWLIFE). Using the Punjabi language, which has always been the language of farmers, rural areas and the working classes, was a conscious attempt to align the women’s freedom struggle with that of the struggle of the economically disadvantaged segments of our society. As economic emancipation for all economic sectors of society is a very important part of the Aurat March Manifesto.

Pakistan’s first ever Transgender Actress Alina Khan has been giving international performances as a dancer all over the world representing Pakistan, but has not been given the space or respect to do so in her own country, owing to the stigma and taboo around trans identities in our society.

Alina’s performance at the AM 2021 was based around the physical and mental violence that the trans community is subjected to an everyday basis in Pakistan; saying that since 2018 500+ transgender persons have been murdered. Who will answer for them?

Giving such a platform, space and equal opportunities to the Transgender community is an integral part of the AM Charter, with the statement “We demand the transgender and khawajasira community’s right to equitable access to and experience of health services. The state should allocate more resources, i.e. sensitization training, to ensure that the mis-gendering and discrimination within the medical community are corrected.”