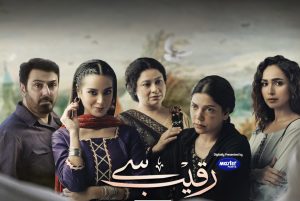 Written by Beegul and directed by Kashif Nisar ‘Raqeeb Se’ is produced under the banner of Momina Duraid Productions.

The drama serial is inspired by Faiz’s poem ‘Raqeeb Se’ and is an unconventional love story which revolves around two long-lost lovers (Noman Ijaz and Hadiqa Kayani) who meet after 20 years.

Suno Chanda actress Iqra Aziz and Ghamand actor Noman Ijaz are being lauded for their onscreen chemistry and performances. Here’s what the audiences are saying:

#RaqeebSe seems like an old Pakistani classic drama. The whole story is weaved so beautifully that it takes you into another world, i mean you just cant get enough of it. Beautifully portrayed the so many shades of love.
Exceptional drama. Seems like a breath in the freah air. <3

The entire cast of #RaqeebSe is so PERFECT. Every character holds your interest. Sania Saeed and Hadiqa Kiani have my entire heart.💘 Iqra Aziz and Nauman Ijaz have set the screen on fire with their phenomenal performance.🙌But the actor playing Rafique Ali. 🙌🙌🔥🔥 POWERFUL.💥

Just watched both episodes of #RaqeebSe & I must say Iqra Aziz is one of the best actress we have. Great storyline & performances from Nauman Ejaz, Sania Saeed & Faryal Mehmood. Definitely recommended if you're looking for realistic & different content.

The drama serial also marks the acting debut of Pakistan’s singing sensation Hadiqa Kayani. The singer took on the role of ‘Sakina’ in the serial with such finesse that it’s hard to believe that it’s her debut performance!

Watch the very first episode of Raqeeb Se below:

Are you also following Raqeeb Se? If yes, then let us know what your thoughts are on the drama serial by leaving a comment on our Instagram page!