Body-shaming other celebrities is now becoming a problem we need to stop.

Why can’t we live and let other’s live?

Another day, another ridiculous beauty standard enforced over women. It’s seems like after ridiculing Syra Yousef over her skin, Pakistani audiences have now chosen to target female celebrities by shaming them over their bodies, and in doing so are revealing the damaging impact such expectations can have over women.

Recently, Mathira has become one of the latest celebrities to be targeted by body shamers when she had posted a picture of herself in her Instagram stories wearing a tight fitting purple dress, and then was met with hateful comments about her changing body size. The actress had then published a lengthy note calling out critics for criticizing her “chubby” body, and said that she was happy with the way she looked:

“I’m so tired of people saying why I have done implants and all seriously it’s a shame. I have hormonal imbalances issues. Stop it. If I do surgeries I will certainly own up. I have put on weight but please stop this nonsense of calling me plastic!” 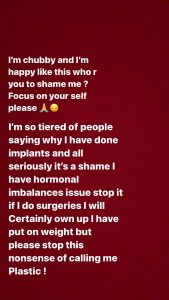 Other actresses haven’t been left alone from this ridiculous trend and have taken their time out to help point out how shaming a person for their body isn’t just bullying, but can also cause a toll over their mental health. Juggun Kazim had recently given an interview to BBC Urdu about the body-shaming pregnant mothers under-go during and after their pregnancy, and pointed out that this had significantly made post-partum depression a difficult period to get out of. In tears, the actress recalled that she had begun to walk in a different way to stop bringing attention to her changing body parts, and even wished that she didn’t exist any more:

“I had incredibly bad post partum depression. There would be days when I would wish that the ground would open up and swallow me completely…Even when I use to walk, I would hunch so that no one could notice how big my chest had gotten. I don’t want to live like this, no girl should be forced to go through something like this.”
So in light of these revelations, we all must reflect on the damaging impact body shaming can have over others, and remember that by the end of the day celebrities are also human beings and their bodies cannot remain perfect all the time! After all, why should women have such restrictions imposed over them to look like angels around the clock, while men are not? Our media industry is filled with an overwhelming number of men who are 50+ and continue to be offered work while women cannot make a public appearance without someone commenting that they’re too skinny or too fat? Celebrated male actors like Behroze Sabzwari and television screen writer Anwar Maqsood have never been ridiculed for being too old or too fat, so why must women actors suffer from this? 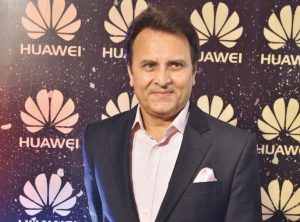 On an end note, let me re-call the articulate manner in which Mehwish Hayat had addressed the issue of body-shaming in the interview with Vasay Chaudhry’s show “Ghabrana Nahi Hai“. The actress had said that people should be mindful of how they are utilizing their public platforms, and should remember any misled comment can be heard by their fans.