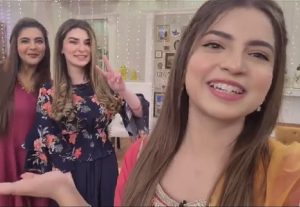 Social media became abuzz shortly after Dananeer’s seconds long video went viral a few days ago – most of the social media users claimed that Dananeer would next be seen in Nida Yasir’s show since Nida has a repute for inviting all social media sensations to her show – rightly so!

For days when no such news came in, people were let down. However today, Dananeer alongside Zara Naeem – who topped in the ACCA examination appeared on Nida Yasir’s show and the social media reaction is what we’re living for.

Here’s how people are reacting to Dananeer and Zara’s appearance on ‘Good Morning Pakistan’ :

Nida yasir has done it and yes dananerr is so cute.🤭♥️#PawriHoRaiHaipic.twitter.com/pzZLQFcLwk

The morning program had a very important yet powerful theme. Two very empowered women were invited to talk about their journeys and there’s nothing more inspiring for those watching the show.

Did you watch today’s episode of Nida Yasir’s show ‘Good Morning Pakistan’ featuring the lovely Dananeer and Zara? Let’s us know by dropping a comment on our Instagram page!