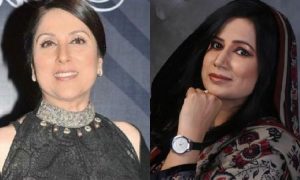 Farhat Ishtiaq pointed out the double standards that are still very much alive in our society when it comes to infidelity. When a man cheats, its a completely different story altogether in comparison to that of a woman.

The writer received support for speaking out against the drama title on Twitter. Here’s what people had to say:

thank you for writing women who are strong enough to respond back to men and stand up for themselves. thank you for showing characters with enough gray so that they can be understood as humans and not heroes/villains only.

Samina Peerzada also took to social media to express her disagreement by posting the following post:

Mere Paas Tum Ho has gotten mixed views after being seen in a different light after the release of a controversial interview of the writer, Khalil-ur-Rehman Qamar.

On another note, CEO of ARY Digital Jerjees Seja took to Twitter to address the back lash and stated that the audience needed to calm down and enjoy the drama serial as its ‘just a drama’ with no real reference to real life!

FacebookTwitterLinkedInWhatsAppPinterestGoogle+
0 0 0 0 0
November 4, 2019
No Comments Yet

Khalil Ur Rehman: Second Last Episode Not For the Faint-Hearted!