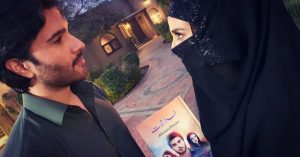 The drama serial, Khuda Aur Mohabbat 3 is directed by Wajahat Hussain and written by Hashim Nadeem under the production of Abdullah Kadwani and Asad Qureshi’s 7th Sky Entertainment.

In the serial Feroze Khan will be playing a confident young boy from a lower middle class background. The plot and storyline  of the serial will revolve around love and spirituality. He will be starring against ‘Jhooti’ actress Iqra Aziz.

Watch the official trailer below:

The countdown comes to an end!

The trailer shows a complicated love affair situation featuring Feroze Khan and Iqra Aziz. Here’s how the audience is reacting to it:

@danialhussain24 did you see trailer of Khuda Aur Muhabbat ? #Ferozekhan is just 🔥🔥🔥🔥🔥

Reportedly the drama serial is expected to release on the 31st of January. Fans and followers of Iqra Aziz and Feroze Khan are impatiently waited for the release of the drama serial. The trailer has done a great job of adding to their curiosity.

What are your thoughts on Khuda Aur Mohabbat 3’s official trailer? Let us know by dropping a comment on our Instagram page.