As the death toll from the ravaging monsoon floods in Pakistan rises above 1’000, affecting millions of people being made to suffer loss of lives, shelter and livelihoods- flood survivors are facing ever-increasing difficulties as the affected include students, pregnant women, persons with medical difficulties, animals and health workers.

With the ongoing “humanitarian disaster of epic proportions”- stories of heartbreak, bravery and strife continue to pour in from the disaster struck areas.

Recently, a pregnant woman gave birth to her child next to the remains of her house- which had been destroyed by the flood. 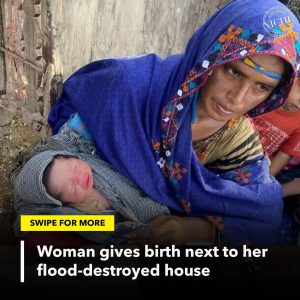 Ibrahim from the village Sabu Buriro, shares how he left his books- which he considers to be a ‘part’ of himself inside a room comparatively on higher ground. Since then, he says he has been hoping that the room will be safe & books will escape damage till the water recedes-which may take months.

by myself alone. I prioritised learning&reading over many things, those books r part of me, i have left these inside a room comparatively on higher ground. Since than i have been hoping that the room will be safe & books will be undmamaged till water recedes-which may take months pic.twitter.com/NjFpswsexn

Meanwhile, health workers are doing their best to alleviate the effects of the natural calamity- vaccinating people in the region and trying to rehabilitate affectees in all the necessary ways. 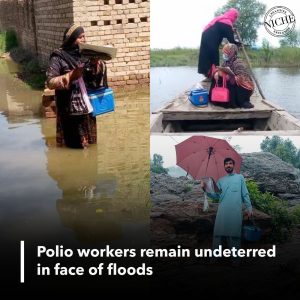 Animals are bearing the brunt of the floods along with the humans. The video shows stranded animals being handed out some food for survival by rescue teams.

As the grasslands are all submerged in water, cattle and other herbivores in the area have begun to suffer from undernutrition and disease.

Pastoral communities, villagers whose grass lands in Hamal Lake and in Warah/Kamber Taluka are submerged in water and their cattles are dying to unknown disease (no veterinary doctors to help!) to safe sides after land is completely flooded in these areas. pic.twitter.com/SXOd4LN8PO