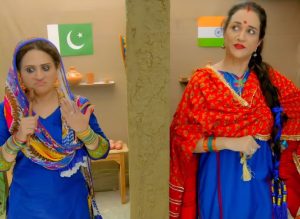 The video shows the duo singing a ‘punjabi tappa’ song called ‘Humsaye Maa Jaye’ from their kitchens divided by a wall. Bushra Ansari acts as the Indian neighbor while her sister Asma Abbas plays the role of the Pakistani neighbor who together shed light on the war-mongering sentiments present in India and Pakistan against the will of their citizens who  want peace and harmony instead. The video also sheds light on the subject of the political games played by the leaders of the countries for power and authority.

Indo-Pak tensions escalated in February earlier this year after the Pulwama attack which took place in India.

FacebookTwitterLinkedInWhatsAppPinterestGoogle+
0 0 0 0 0
April 5, 2019
No Comments Yet

All what Pakistan’s have been googling in 2020

Celebrities Demand Justice For Marwah After The Horrific News Of Her Murder Surfaces!