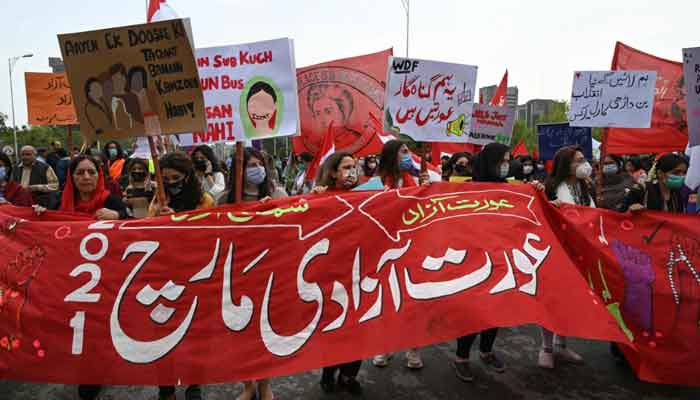 Supporters, attendees and organizers of the Aurat March are demanding an apology, after the intense social media propaganda and lies spread in relation to the March 8 protest for women’s rights. As part of this propaganda, a  video from the women’s protest held in Karachi was edited to falsely show participants chanting blasphemous slogans. This fake video clip showed a large number of women chanting slogans with the beat of a drum mentioning Almighty, Prophet PBUH, and other religious personalities.The doctored video was also irresponsibly given coverage by many Pakistani journalists, anchors and analysts, and quickly spread over different social media platforms.

All this false propaganda and misinformation caused immense mental stress and difficulty to all the women who helped pull the march together, all the victims who came out with stories of physical or mental abuse and the countless students who came out in support of their fellow women. In a society where 70 to 80 percent of the women are already victims of abuse, such baseless allegations against women who finally came out to stand up for their rights only aggravated the situation. Not to forget, that this is also a country where a simple and unjustified allegation for having committed blaspheme has already led to countless murders and mishaps in the past. In the words of the AM organizers, “The Aurat March faces severe backlash every year. Our videos and posters are targeted and manipulated, spreading misinformation and maligning the March. This year, one of our videos was doctored and heinous allegations are being placed on us”.

Here’s is the original slogan, here is our real voice 🗣

Now, finally after having found the evidence to clear all these false allegations, organizers and supporters of the Aurat March are calling for an apology for the edited/doctored video to wrongly show participants raising those blasphemous slogans.

Earlier today, the Human Rights Commission of Pakistan strongly condemned the the deliberate, vicious campaign against @AuratMarch, saying “Once again, allegations of blasphemy have been weaponised, this time against women who bravely drew attention to the harassment & sexual assault they had experienced.”

HRCP strongly condemns the deliberate, vicious campaign against @AuratMarch, incl. by sections of the media. Once again, allegations of blasphemy have been weaponised, this time against women who bravely drew attention to the harassment & sexual assault they had experienced. 1/2

This is not just repugnant, it is an incitement to violence. We demand that action be taken against all such persons. A mere apology is not enough. Indeed, it is a matter of great shame that such a backlash has become a recurring feature of @AuratMarch. 2/2

One or two journalists have also come out as the voice of reason, shedding light on the unfairness of the situation. Shahzeb Khanzada from GEO News has played a very important role in clearing up the disinformation campaign.