Why are we still unable to treat restaurant workers with respect?

People working as chefs or waiters in the service industry are equally worthy of respect and dignity as any other profession is and its high time that our society begins to comprehend this! Popular comedian on Instagram brought this topic to attention when she uploaded a video while visiting the restaurant Test Kitchen in Karachi where she recorded a person berating the head chef when she was asked for her vaccination card.

Along with this clip, Swinnery uploaded a post that laid out how grueling working hours are for people in the service industry, and how people like the woman in the video make it extremely difficult for them to survive. In her next story, she pointed out that if people aren’t willing to act in a respectful manner with restaurant workers, then they can stay at home. 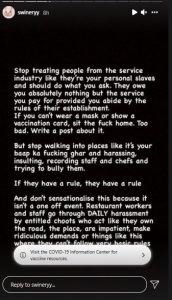 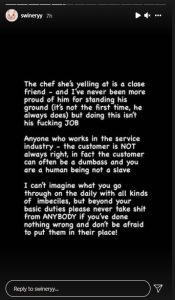 The video soon went viral on Twitter and other celebrities like singer Natasha Noorani and comedian Ali Gul Pir also weighed into the conversation. The singer pointed out the irony of the woman claiming herself to be a human rights activist and yet still resorting to humiliate restaurant workers.

BUT SERIOUSLY GUYS treat restaurant staff with respect and go dine in but get vaccinated first, it’s the law pic.twitter.com/xSjQ9XWyOW

Other people on twitter had to extend their sympathy to restaurant workers by pointing out that how they are working for long hours and low pay, but were also being insulted during their jobs because of a government policy that requires them to ask customers for the vaccination certificate

PSA: Restaurant staff asking for your vaccination certificate, as per existing govt regulations, is not a violation of the constitution. You refusing to show it while shouting at the staff is, however, proof of you being an a-hole.

This user mentioned that every restaurant had the right to withhold people without masks from entering into their place because not only are they violating a policy made by the government, but they were also putting other people’s lives at risk because we are still in the middle of a pandemic!

Your conditional rights are only applicable until they aren’t violating others’ absolute rights. You cannot enter a premise in the middle of a global pandemic without a mask and risk other people’s right to life and safety just because you want your right to “medical privacy.” https://t.co/Mm603TB0v4

So please let’s all try to respect and show empathy to people who are working longer hours than us and wear a mask every time you are attending a public place!