Kashmir being one of the most vulnerable and volatile places on earth at the moment has been under a lock down as telecommunications have been suspended in the region. With Article 370 being revoked last week, tensions have been high between India and Pakistan.

Instability and terror has spread across the diaspora, and seeped through at LA’s Beautycon, where Actress and UNICEF ambassador Priyanka Chopra was confronted by Ayesha Malik, a young Pakistani-American woman based in Anchorage, Alaska. 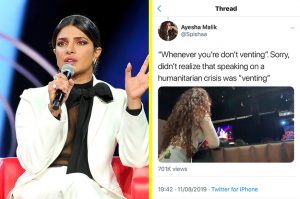 When Priyanka was asked about her stance on the matter as the UNICEF’s ambassador, tweeting in support of the Indian Army’s violation which could lead to war between both nuclear countries, Ayesha’s question was seemingly cut off as the security grabbed her mic.

Chopra, who was on stage and surrounded by her adoring fans who kept clapping for every word she uttered, responded: “I hear you. Whenever you’re done venting. Got it? Done? Okay, cool… The way you came at me right now, girl, don’t yell. We’re all here for love. Don’t yell. Don’t embarrass yourself.” The resulting video went viral.

After the video went viral alot of Pakistani celebrities have come forward with their views on the matter.

After the incident alot of international magazines including dazed and confused and Buzzfeed reached out. In a recent interview Ayesha Malik cleared the air on how the matter was taken out of context and turned into a hate game between Priyanka and herself, where as her concerns were more about Kashmir and Nuclear War which would not only effect the two countries but the entire world.

Malik believes as UNICEF ambassador Priyanka should have used her influence responsibly rather than Gas-lighting and changing the narrative against her without even addressing the issue.