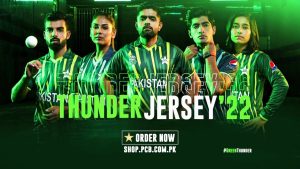 Watermelons are having a moment!

On Monday evening, the Pakistan Cricket Board (PCB) finally revealed the much-awaited T20 Thunder jersey in a video featuring Babar Azam, Shadab Khan, Naseem Shah, Fatima Sana and Kainat Imtiaz. In a funny or should we say a refreshing turn of events the yellow and green stripes on the jersey is making Twitteratis compare it to Watermelons.
Who would have thought the release of the new jersey could be meme material but leave it to Cricket fans to hype anything and everything.

There has also been some evident banter between Indians and Pakistanis. While people from across the border are calling it a ‘Tarbboz’,
people have also compared India’s new jersey to popular Toilet cleaner Harpic. At this moment it looks like anything blue works.

Now onto the memes.

Fans compares the new kits of Team India and Pakistan with Harpic and Watermelon! #tarbooz pic.twitter.com/pXNXvzjwjh

Absolutely brilliant Kit But our nation have problem with everything. You just can't make them happy. Call it Tarbooz or whatever but if Pakistan wins the #T20WorldCup in this Kit, then same people will remember this Kit for years.#GreenThunder ⚡ #PAKvsEng pic.twitter.com/hKmEY3cffd

While criticism for the Pakistani Cricket team is a constant, endless love for Captain Babar Azam and thirst tweets for Naseem Shah are also proving to be a regular Twitter feature.

Many other teams including Australia and England have also released their kits but looks like all the buzz surrounds our kits. We’re not complaining.