Twitter is all praises for Sarah Khan & Imran Ashraf 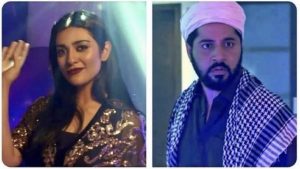 Sarah Khan and Imran Ashraf have been very successful in wooing the audience via their solid performances in the currently on-air drama serial Raqs-e-Bismil. The drama serial released only almost two weeks ago and is already keeping the audience on the edge of their chairs!

The latest episode of the drama serial surprised the audience with a plot twist and here’s how the audience is reacting to it:

Whn u crush over someone's personality and then u get to know they were faking it all that time.
DAMN !!!😣😣😣
feeling extremely sad for MUSAA 🥺#RaqseBismil

Moosa in First Episode.
Moosa in Third Episode.
You can literally witness the difference between the two and the change didnt look out of the place or just sudden. The sign of Good script and Good execution. @IamImranAshraf #RaqseBismil

The most interesting cliffhanger I have ever seen 😔😊👊#Raqsebismil https://t.co/eRcukZj5Sv

In the episode, Moosa (Imran Ashraf) discovers that his love interest Zohra (Sarah Khan) is the complete opposite of what he presumed her to be. When the Moosa fell for her, Zohra was clad in an Abaya, covered from head to toe – she even had gloves on which was very attractive to Moosa, however he later finds out she’s very different in real life from when he first saw her bringing a surprise twist in the serial!

Are you also following Raqs e Bismil? Let’s us know what your thoughts are on the latest episode by leaving a comment on our Instagram page!