Trio Of Eid Films: Which One Seems The Best Pakistani Film Out Of All?

Trio Of Eid Films: Which One Seems The Best Pakistani Film Out Of All? 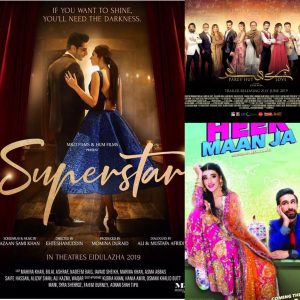 As we all know, Eid has become a special event for Pakistani films to make their mark. This Eid isn’t any different in terms of the number of films releasing. Three trailers, a number of dance worthy songs, stunning visuals and noteworthy dialogues are some of the things we’ve seen so far. Are you confused about which film to watch this Eid-ul-Azha? Parey Hut love, Heer Maan Ja or Superstar? Don’t be, here’s my analysis of the films competing at the Pakistani box-office this Eid…

Starring the Superstar herself, Mahira Khan and Bilal Ashraf, this film produced by Hum Films promises to be full of romance, theatrics and beautiful visuals. Even though in terms of releasing its trailer the film joined its competitors a bit late in the race, the trailer has already crossed 1 million views. Judging from the trailer, Mahira Khan seems comfortable in her role as Noori and adds aura and starriness through her performance. Bilal Ashraf seems to be getting a meaty part as Sameer as well, rather than just being the typical desi hero. From what we’ve seen so far it shows that he’s put some effort as far as the acting is concerned. What am I excited about and what do I fear about the film so far?

Heer Maan Ja produced by Geo Films, stars the hilarious duo of Ali Rehman Khan and Hareem Farooq. The actors who starred in the film Parchi last year are all set to bring humor and drama to the big screen this year. Directed by Azfar Jafri, who came up with Janaan a couple of years ago, Heer Maan Ja seems a bit more on the fun rather than serious side. What excites me and what do I fear about the film?

Parey Hut Love, a product of Ary Films, is undoubtedly one of the most anticipated films of the year. Directed by Ho Mann Jahan director Asim Raza, the film promises to be full of drama, beautiful visuals and perfectly etched charcters. Starring talented people like Sheheryar Munawar, Maya Ali, Zara Noor Abbas and Ahmed Ali Butt in the leading roles, the film promises to be an interesting ensemble drama with beautiful sets and dance worthy songs. Something that adds a bit more excitement about the film are cameos from superstars such as Fawad and Mahira Khan. What excites me so far and what do I fear could go wrong?

Which film are you most excited about? Let us know of your favourite out of the three.