The Legend Of Maula Jatt Appears To Be The Choice of The Public This Eid! 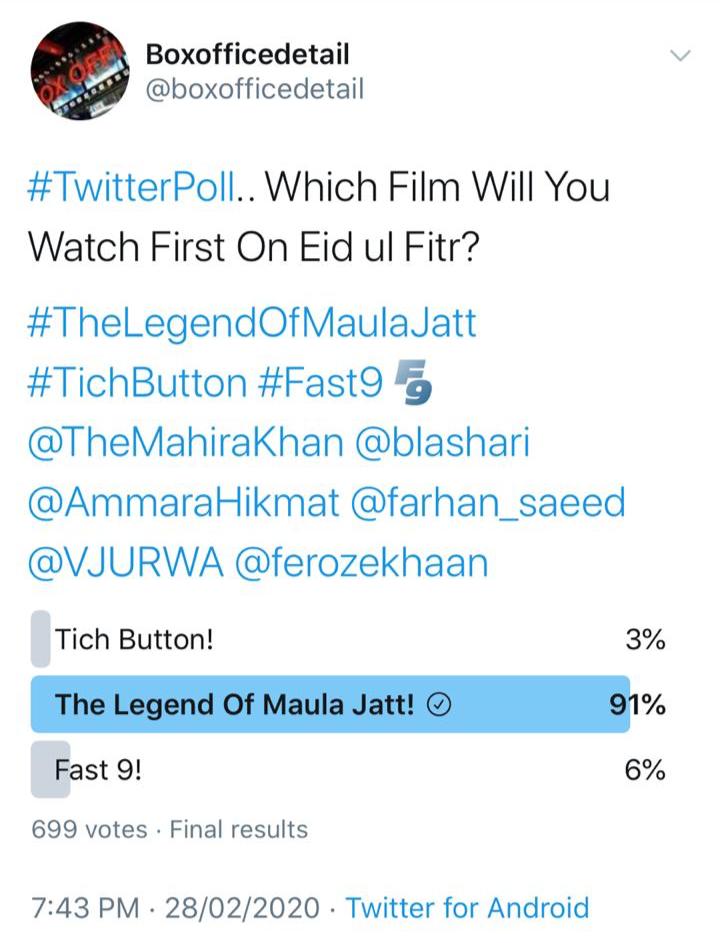 Eid-ul-Fitr is still a few months away but it appears that the public already knows what they want to watch this Eid. The Legend Of Maula Jatt also beat Fast 9 by an astounding margin in an online poll.

The audience is eager to watch the much awaited film as is apparent by the 91% votes in its favour. In its competition was Hollywood’s biggest film of the year- Fast 9, which got 6% of the votes.

The cast of the movie includes many famous names including, Fawad Khan, Mahira Khan, Hamza Ali Abbasi and Humaima Malick in lead roles.

Recently Fawad also gave us a glimpse of his look and elaboarted on what went behind curating his character which is making us even more excited about the release.
https://www.instagram.com/p/B83yFBpAwN7/
Furthermore, The Legend of Maula Jatt is the most expensive movie of Pakistani film industry till date and it is packed with never-seen-before action sequences. This joint project between producer Ammara Hikmat and director Bilal Lashari has been a long time coming and fans have been waiting for this mega project to hit the cinema screens with much anticipation.
Other than the stellar ensemble cast and lots of action drama, the film offers a contemporary outlook to the classic Punjabi gandassa films.

This highly anticipated film will be FINALLY coming to the big screens on Eid ul Fitr.

Muhammad Moiz exposes ‘Beelas’, who attempted to gang-rape him

Overdone plotlines we wish Pakistani dramas would get rid of!

Pakistani dramas & their worrying prejudice against women: Are ‘harassment’ and abuse really topics to joke about?