Social media debates whether it is the locals responsibility to support Pakistani films or not.

Four Pakistani films have been released this past week: Ghabrana Nahi Hai, Parde Mein Rehnay Do, Dum Mastam and Chakkar. However, these films have been receiving terrible reviews as well as low turnout in cinemas. While in comparison, the new Marvel film Doctor Strange and the Multiverse of Madness has received a grand opening in Pakistani cinemas with more people turning out to watch it which has irked Pakistani filmmakers. Recently, many Pakistani celebrities like Arsalan Naseer criticized the poor ratings new Pakistani films were receiving, and called upon Pakistanis to support local artists rather than foreign films.

But is it solely the responsibility of Pakistani people to support content they have criticized in the past for having misogynist or regressive storylines? Many Pakistani films released in the past have received criticism for their display of casual misogyny for instance in the film “Punjab Nahi Jaongi“, the main lead Fawad (played by Humayun Saeed) slaps his wife Amal (played by Mehwish Hayat) when she announces that she refuses to remain married to him, which received a lot of negative backlash from Pakistani audiences. Similarly, Dum Mastam has also received criticism for including the slur “khusra” and was denounced by the transgender community for including such harmful commentary. Also in the trailer for the film, the main lead is seen trying to seduce the girl in a film cinema when the lights go out, he is seen trying to kiss and grope her.

On social media, twitter users shared that they refused to support Pakistani films that were not progressing past the same misogynist and regressive storylines they had consistently kept calling out in the past

I urge the local film industry to support the middle class working folks by making better content. International films are taking all our money. Pls help us support local films, pls make films that we can tolerate.

The TL the past two days pic.twitter.com/iCA45N8J4Y

People only go to the cinema when it’s a DC or MCU movie anyway. Pakistani film industry needs to stop being bitter and make better movies so people actually want to watch it.

Many users also shared how nepotism and connections thrive in the entertainment industry, which means that few people get to have a chance to work as writers or filmmakers, and which is why the movies produced are based on the same unoriginal ideas which does not work with the audience, who want different stories that do not revolve around marriage and romance.

i don’t understand why pakistani actors are suddenly losing their shit. no offence but our local film makers are so reluctant to diversify and go for genres other than romance. there is nothing captivating about these films, we’re done with this homogeneous content

Pakistani actresses like Humaima Malick have also supported the audiences right to reject Pakistani films for the content they make, and urgd local filmmakers to instead start listening to the people and make good films that introduce different stories and do not depend on misogyny or transphobia. 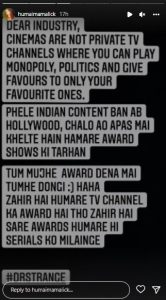 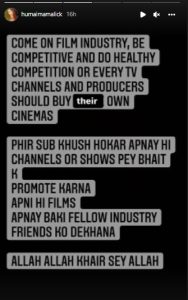