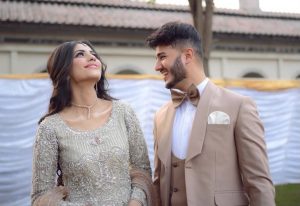 Pakistani-Canadian YouTube influencer Shahveer Jafry just got engaged in a beautiful intimate ceremony in Pakistan. Photographs from the lovely day-time event went viral shortly after the news was announced.

The news of the engagement was announced by Shahveer himself. Here’s what he posted on social media:

The YouTuber posted two stunning pictures of himself and his fiancé from yeh engagement and caption it as, “We are engaged!”

After the news was announced it quickly spread like fire. fans and followers of the YouTuber sent Shahveer and his fiancé their best wishes and prayers. Of what we know do Shahveer’s fiancé Ayesha Baig so far is that she is a fashion designer by profession and reportedly runs a page on Instagram by the name of ‘Ayesha Baig Couture’.

While Shahveer and fiancé Ayesha were showered with love and prayers by fans, meme lords did not hold back either and presented one meme after another.

Here are the ones that got us cracking:

We wish Shahveer Jafry and fiancé Ayesha Baig a lifetime of happiness as they embark and this new journey together!