While the rest of the world is moving on with progressive storylines that champion equality and respect for all genders, Pakistani dramas seem to consistently run backwards by setting a new low bar on the kind of misogyny and blatant racism they display to their audience every day. At first it was having to tolerate a show which taught women to marry their cousins stay in abusive households and tolerate invasive and rude in-laws, and now “Pyar Deewangi Hai” is bringing this with some new added masala: blackface.

Black face is a form of racism when a person in a television show who is naturally light-skinned, would paint over their face in a darker shade to play a person. Pakistani audiences were quick to criticize this as racism that cruelly excludes majority of people in a majorly brown, south asian country who have a darker shade of skin tone, by solely employing fair skinned actors to play dark-colored people. Parizaad on HUM TV was subjected to widespread criticism when its main lead played by Ahmed Ali Akbar, who is a light-skinned man, had donned blackface for the role. Users pointed out that this was a horrifying display of ignorance and dehumanization of dark-skinned people who were over-looked for the role and weren’t even consulted about the experiences over which the show was written.

parizad is a terrible show simply for using black face when the whole premise is battling colorism you’re really telling me you couldn’t find a single dark skinned actor in a predominantly brown/south asian country?

In the new drama “Pyar Ki Deewangi” blackface is used this time not to discuss the suffering and ways dark-skinned people are ostracized, but it is more to play in to the cruel stereotypes associated with dark-skinned tone. In the show, the actress Gul e Rana, who is actually a fair-skinned person in real life, plays a cruel mother Naseem whose niece Rabi, a beautiful and fair-skinned girl who is in love with her son Mateen, and the two of them want to get married, to Naseem’s anger. 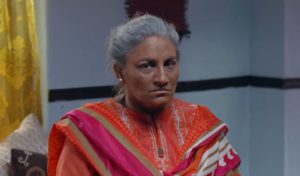 If we are familiar with the history of colorism and the blackface, it was a product of several centuries of colonialism and the racist attitudes of the Europeans, who invaded over South Asian and African countries like Nigeria, India and Vietnam where they began an illegal slave trade system by sending darker-skinned people from these countries to work as slaves and field workers in European countries. The system of colonialism in south asian countries set up a hierarchy where European people were employed in government and leadership positions and also got employment in the best colleges and jobs, while the local natives were excluded and harassed by police and legal authorities by being called “savages”, “chooray”, “backward minded”.

For years, activists and actresses have educated the public on the awful consequences of racism and colorism, and the ways it harms the self-esteem and opportunities for dark-skinned women who are told all their lives they are unworthy because they aren’t beautiful. We have actors like Amna Illyas who made national headlines in 2015 when in her acceptance speech she pointed out to her critics that despite being “ugly” because she is dark-skinned, she has still worked hard and made a name for herself in Pakistan.

But it is still so disappointing to witness Pakistani dramas still indulge in these stereotypes and make shows like “Pyaar ki Deewangi” which champions such regressive colorism takes. The character of Naseem is seen to be consistently jealous of the beautiful Rabi because of her fair skin, and Naseem recalls how once she was rejected by Rabi’s uncle because of her complexion. By episode four, Mateen and Rabi announce that they are madly in love and are getting married, to which Naseem is angered by and refuses to accept his son’s future bride.

If we keep indulging in regressive dramas for the sake of ratings and popularity, then we are ignoring the harmful consequences of how such tone deaf display of colorism and disregard towards dark skinned people can have towards women who come from conservative areas and are dark-skinned. This is a country where majority of women are still spending money and using fairness and whitening skin cream brands and which have large doses of harmful metals and mercury which can lead to prolonged skin problems like acne, skin atrophy and excessive hair growth.  Instead of consistently churning out such a widely hated topic, bring forward actresses like Ayesha Omar who have been outspoken about rejecting endorsements from fairness skin brands, and creating a more inclusive society where more women learn to embrace themselves as they are:

“The big brands make offers but so do smaller ones hoping to make a mark. I think I got offered my first fairness cream endorsement 13 years ago. But from the very onset, I was not comfortable with extending my support to a narrative that equated a fair complexion with success. Growing up, also, I felt disconcerted by this line of advertising. I had friends with very diverse skin tones and I used to wonder how they must feel when they saw these ads that unabashedly put down dark skin. It is a concept that I have never been able to accept.”