We often hear that rock bottom is where the preference for Pakistani dramas lie-but even below this is the pits of hell from which should be solely preserved for the male leads from these dramas. These are the type of men you wish you would never ever encounter again in your life because of their narcissism, abuse, and yet they are solely marketed to young women and girls as the ideal men they must look for, without considering the dangerous consequences for their messages.

Writer Nemrah Ahmed took to Twitter to call out our entertainment industry’s continuous love affair with toxic male leads of dramas and remaining blind to the dangerous message they are sending out to young women of Pakistan. In her Instagram stories, she pointed out that how these toxic male leads present women with a twisted version of love, and telling them their worth solely lies with how a man views them:

“What is wrong with the Pakistani Dramas toxic hero culture?

A wealthy and handsome playboy keeps pursuing a middle class girl. He kidnaps her, stalks her, abuses her, shouts at her, physically assaults her but he still is the hero. In the end, the hero wins over the girl. That is where these dramas end. Love wins. They call it ishq.

But in real life what do these toxic abusive partners do?

They become Zahir Jaffar. They pursue Noor Muqaddams and they don’t let go of them. On one side we are fighting against Zahir Jaffar’s and on the other side we are glorifying these narcissist men?” 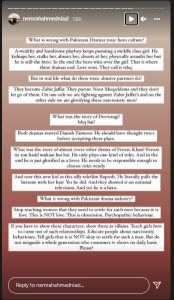 Nemrah’s words are true regarding the kind of male leads we have seen in some of the popular dramas created last and this year, and the kind of problematic actions they did that would raise a red flag. Some of their most common qualities include having a narcissist personality, that refuses to see women as individuals but demands them to concede to their demands by displaying anger or aggression

Another problematic trait we can spot in these male leads is how they refuse to acknowledge that women have a life outside of being their significant others, and will want to continue having a career after their marriage. Like this scene from “Ishq-e-Laa” where the male lead Azlan lectures his to-be-wife that she must give up on her career in order to be his wife.

The most troubling rise of such problematic male leads is how they are normalizing violence towards women. Like how this controversial clip from “Aye Musht-e-Khaak” where the main character Mustajab violently drags a woman in a room and proceeds to beat her up

If this is the standard of men we’re being told consider as acceptable , then who is looking out for the women and young girls in this country who must regularly deal with the consequences of these messages? Al-jazeera reports that women in Pakistan are not safe from domestic violence and abuse, as according to the 2017-2018 Pakistani Demographic and Health Survey, more than 28% women from the ages of 15-49 have suffered from physical violence at the hands of a partner. Moreover, according to the London based “Thomas Reuters Foundation”, Pakistan has been as the sixth most dangerous country for women in regards to the rise of rape and domestic violence cases as it reports: “Pakistan is ranked amongst worst countries for women in terms of economic resources and discrimination as well as the risks women face from cultural, religious and traditional practices, including so-called honour killings. The country also ranked for non-sexual violence, including domestic abuse. In Pakistan, 90 percent of women experience domestic violence in their lifetimes”

After the tragic murder of Noor Mukadam, it has been a year later and yet women still do not see the murderer Zahir Jaffer being held accountable, and yet our public officials continue to gaslight and blame women for the crimes of men. There is a greater need for the media to shift the conversation and by doing so, it can help challenge the misgoynist mindset and bring more women centered stories forward. We already have seen two dramas this year that shift away from the toxic male lead mentality- both in “Parizaad” and “Dobara”. People were awed by the gentle nature and kindness of Parizaad when in one episode, he defends the female lead Bubbly after her parents try to dissuade her from embracing masculine qualities. This shift was small, but its largely needed in how we hold conversations about masculinity with our generation, and help them understand that no woman should ever disguise fear as a form of love.