Mahira Khan to feature in a new show by Zee, “Yaar Julahay”

Mahira Khan to feature in a new show by Zee, “Yaar Julahay.” The first episode of the show will be aired on Tata Sky Theatre on the 15th of May and  will appear on other DTH platforms as well. 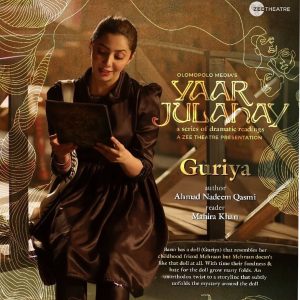 Mahira Khan will read Ahmad Nadeem Qasmi’s story, Guriya, on the show and Sarmad Khoosat said that the show is inspired by the story telling tradition of ‘Dastangoi’.

Sarmad Khoosat who is also directong Guriya said, “We have interpreted Dastangoi in a contemporary way and there is also live and recorded music along with suggestive details articulating the theme of the story. For instance, when I directed Mahira Khan for Guriya, the set was strewn with dolls. They created an eerie atmosphere that augmented the narration and enhanced the mood of the reading.”

Chief Creative Officer Special Projects ZEE Shailja Kejriwal, while speaking about the project said: “Each episode of Yaar Julahay features the immersive reading of a remarkable story that is as unique and complex as the subcontinent we live in. Each one of the featured writers has processed reality through characters that we can still identify with.”

She further added, “It was a joy to work on these classic tales with Kanwal and Sarmad Khoosat because we have collaborated with them before and they always approach a project with a certain artistic sensitivity and deep respect for the material they are working with. Their sensibility was needed for a project as unique as this.”