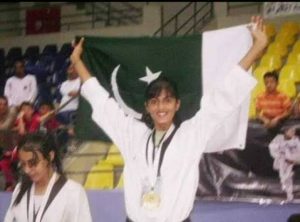 Pakistan mourns the sudden tragic passing of Taekwondo fighter Maham Aftab after she passed away yesterday in Lahore.

Reportedly, the 26-year-old Pakistani athlet and international champion was battling with brain tumour for the past two months at a local hospital. She was a mother to one child.

The nation took to social media to express grief over losing a cherished gem of Pakistan. Many expressed their shock and recalled the times when Maham made Pakistan proud.

Here’s what people are saying:

The PCB is shocked to hear the news of passing of Maham Aftab, 26-year-old highly-talented taekwondoin. She made Pakistan proud at an international level. PCB offers its heartfelt condolences to her family and friends.

We're shocked to hear the news of passing of Maham Aftab, 26-year-old highly-talented taekwondoin. She made Pakistan proud at an international level. We offers heartfelt condolences to her family and friends.
May she rest in jannat pic.twitter.com/oEUJzAJXux

In 2008 Maham was the only young player who was honoured with a gold medal in an international event held in Jordan.

Besides winning national and international events, she also represented Pakistan in the Youth Olympics held in Indonesia. However, the Taekwondo starlet had quit participating in the sport for almost five years before her passing.

Her services will be remembered always as she won laurels for Pakistan. May God Almighty rest the departed soul in eternal peace and give courage and fortitude to the family to bear this irreparable loss,” Pakistan Taekwondo Federation President Col (r) Waseem Ahmed said.

We at Niche Lifestyle extend our deepest condolences to the Maham Aftab’s family and close friends on the tragic demise of the athlete. She will continue to remain in our hearts and will always be remembered as the pride of Pakistan.