the unrequited love is killing us slowly but surely 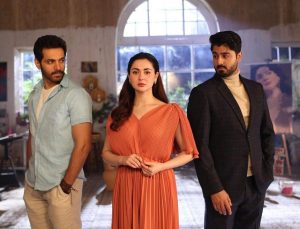 The love triangle trope can be a slow burn and ‘Mujhe Pyaar Hua Tha’ is proving to be exactly that. The drama shows the story of Saad (Wahaj Ali), Maheer (Hania Aamir) and Areeb (Zaviyar Naumaan). Saad has been in love with his cousin Maheer for a long time but is unable to confess his feelings for her. Now that Maheer is showing a romantic interest in Areeb, Saad is torn between his happiness and Maheer’s happiness.

What we love is how Saad’s character distances itself from the dominating, wrist grabbing, forceful main lead who coerces the girl into romanticizing him in a toxic manner, Saad on the other hand values Maheer’s feelings and is deciding to let go of his desire to be with Maheer.

What viewers really appreciated was how Wahaj did not have many dialogues in the last episode but his silence was screaming, he delivered through his expressions and was a true winner in the viewer’s eyes. One user wrote ” when he cries, we all cry”. Oh boy, oh boy! We didn’t cry, we bawled our eyes out!

The drama has been written by Sidra Sahar Imran and directed by Badr Mahmood. It airs every Monday at 8 p.m on ARY Digital.

Zero props. Zero dialogue. And 💯 expression! #WahajAli is winning as Saad. Not for a moment did he lose his grip on that performance! Yeah, I'm a fan for a reason! 😎
👏👏👏 #mujhepyarhuatha #MujhePyaarHuaTha pic.twitter.com/VLO2j3QHS9

"uski Khushi ko khatam kar dun? Itna selfish nai hun men!"
The contrast between Maheer thinking only about herself, simply discarding Saad's feelings but Saad thinking only for her happiness…the softness, purity of his words has no bound 💙#WahajAli • #MujhePyaarHuaTha pic.twitter.com/oqWWqu6HcF

god how to hug a fictional character 🥺

Have you seen the show yet? This is your sign to give the drama a chance, you will be invested in the characters! Yes we can bet.