While the rest of the world is progressing forward by making shows that have better representation of women. However,  in Pakistan we seem to be going the opposite direction with some of the top rated channels featuring shows like “Hum Kahan Ke Sachay Thay” portraying abuse as a form of love.

The show has received criticism in the past few weeks for promoting cousin marriages and pitting women against women but the recent episode on Sunday sparked outrage among popular social media personalities on how the series has romanticised abuse. In this episode, we watch Mehreen being emotionally abused and denied her chance to live a happy life as her husband Aswad bars her from meeting her mother or even from using her phone to contact anyone. When Aswad pressurises her to sign divorce papers so that Mehreen may leave him, instead she retaliates by saying that she won’t get a divorce because she loves Aswad.

10 years of promoting how to STAY “patiently” in (violently) emotionally abusive marriages on the top drama channel with the highest ratings.#SabrKaDIY #HumKahanKeSachayThay pic.twitter.com/6RAIz5YIUy

Another social media influencer Maheen Ghani shared her views on how damaging it is for audiences to watch “Hum Kahan Kay Sachay Thay” and the way it is normalizing women to keep staying in abusive marriages. In a note penned in her Instagram stories, she said that this show has pointed out why there is a need for good show writers in Pakistan to stop writing shows that romanticize abuse and violence against women, and actually lead conversations about women’s rights and mental health problems

“We need writers that are socially responsible and have some semblance of mental health awareness. This show has everything wrong in it, and not to mention; extremely dragged out!” 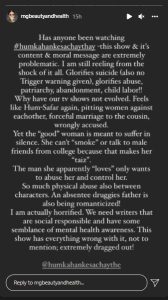 We also need to talk about how “Hum Kahan Kay Sachay Thay” consistently normalizes this abuse by glorifying the “good woman” and how it is sending such a damaging message to the women and young girls who are watching this show. The show has set up Mehreen as the “good woman” because she is someone who despite facing abuse and insults at the hands of her husband, still endures them patiently because she loves him and still waits for him to overcome his hatred so they may live together happily. How is this message coming across to the young girls and women who are watching these episodes while currently living in a country which has been ranked the second lowest in the world regarding gender equality? Every day more cases on domestic violence and abuse emerge as according to the Human Rights Commission of Pakistan almost 90% women have experienced some form of domestic violence- either physical or emotional, at the hands of their families or husbands and almost 47% have reported to suffered from sexual abuse from their husbands.

So in these harrowing times, who is looking out for young girls who are being told now watching some of the most popular dramas in our country send out this message that it was a good woman who didn’t escape her abusive marriage and actually stayed through all the trauma she is going through? Many of these young girls are likely to fall prey to harassment within their homes and in streets and will also face immense pressure from their families to marry and give up on their own dreams and ambitions because this is what good women do. These television shows are teaching women not to empower themselves while living in abusive conditions, but telling them that they must accept them or otherwise they’re considered as “bad women”.

Its clear that our television shows need to be completely re-vamped and discard the over used tropes they keep including every time to produce a highly rated show because of how it is repeatedly promoting sexist biases against women. Because under no circumstances should women think that abuse-whether it is physical or emotional – should be acceptable or seen as an act of affection. It’s a shame that our media platforms are still struggling to understand this message.