Imran Ashraf and Sarah Khan have proved time and again as two of the finest actors from Pakistan’s entertainment industry. Imran Ashraf has given us hits like Ranjha Ranjha Kerdi and Alif Allah Aur Insan and is currently blessing screens via ‘Mushk’ – his very own brainchild.

Whereas, Sarah Khan has given us hits like Band Khirkiyan and Mere Humdam and also just charmed her way into thousands of hearts via Sabaat as ‘Miraal’ which just aired its last episode.

While fans are broken-hearted to see Sabaat come to an end and Sarah go, we certainly do have tea on an upcoming project featuring the lovely starlet.

Imran Ashraf and Sarah Khan are reportedly staring opposite each other in an upcoming drama serial named ‘Raqs e Bismil’.

The drama serial is directed by Chhalawa director Wajaht Rauf and co-produced by Shazia Wajahat and Momina Duraid.

Imran Ashraf shared a glimpse of his character ‘Moosa’ from the upcoming drama serial on Instagram. Here’s what he shared: 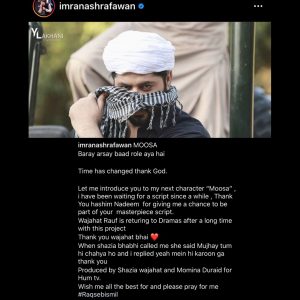 We sure are excited to see what Raqs e Bismil has in store for us and wish the stellar team of the drama serial all the very best!