The Dua Zehra case has once more captured the attention of the entire country when it was revealed by Lawyer Jibran Nasir that the police had rescued Dua and transferred her to a women’s welfare shelter, and they were tracing Zaheer because of his connections to a criminal gang.

However, Hira Mani had a different response to the situation that came across as alarming to the women in the country. In her Instagram stories, she wrote that she hoped nothing would set apart Dua and Zaheer.

“I hope that nothing ever sets apart Dua and Zaheer! And I hope that Allah will indeed listen to my prayers!”

The hashtag #hiramani began trending over twitter as users criticized Hira Mani for making such an insensitive statement about a serious child abduction case, that should have been dealt harshly with.

Users urged Hira Mani to educate herself on the matter

Hira Mani, I urge you to please stop misusing your fame and read before giving your opinions. This is highly irresponsible coming from you – an underage marriage, proof that Zehra was abducted, there’s enough evidence for you to not romanticize this. pic.twitter.com/1fJTfXRTXK

Nothing can be worse than Hira Mani’s singing but her opinions are worst. #DuaZehra pic.twitter.com/TjUa1anwGV

Celebs like Hira Mani are the dumbest people on earth.
They have no idea what is actually going on and they post anything they feel, without doing any research

How about Hira, you learn how to be a responsible Public figure? Know the value of your words

Even other actors got into the conversation to call out the actress and television host for misusing her platform and power by saying misleading things. Khaqan Shahnawaz criticized Hira in his Instagram stories by pointing out that it has been already proven through the courts that this was a case of abduction, and Dua being a fourteen year old girl was married off to a stranger.

“Dua Zehra case has progressed to a point where it was proven in a court of law using DNA evidence. This isn’t a joke. She’s a child that was kidnapped. Someone explain this to @hiramaniofficial.

People like her either need to go back to school or get psychological help because every time they open their mouths, it hurts human kind one way or another!

I am in shock by her comments and will not stay silent just because I’m an upcoming actor and she is a well-established figure in the industry. Bullshit needs to be called out we should all do exactly just that.” 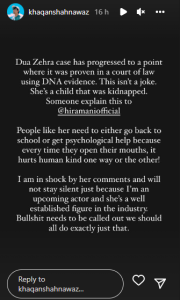