You have to give it to him! We’ve not seen someone in the recent past reach the heights he has reached in in a rather narrow time duration. You may or may not like it but his concerts are packed and everyone in the audience seems to know every lyric to his songs.

The indie star has dropped his debut album ‘Nautanki’ which features 9 tracks with a story unravelling in each one of them. Hasan took to Instagram to announce the release of his debut album, “Oops! Nautanki Hogayee. Go check out my fresh album across all platforms now!” 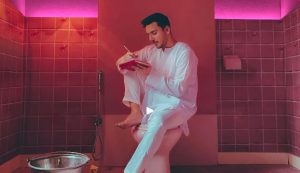 Hasan has become a permanent member of the party playlist with his groovy numbers like Joona and Peechay Hutt in collaboration with Talal Qureshi and Justin Bibis. He is also a favorite in the crusing game with hits like Aisay Kaisay and Sweetu to name a few.

However, the more popular you get, the more the public has an opinion about you and that seems the case with Hasan’s new album as well.
Scroll down to see Twitter attempting to make a verdict on the album.

I can’t explain it but listening to Hasan Raheem gives me the same joy as listening to Dua Lipa. It’s groovy and calmly liberating

Hasan Raheem's new album is actually FIRE. Mans got so much variety in a single album

hasan raheem really made song for everyone in his new album

The flip side is also pretty savage.

hasan raheem's sound works only when it's abdullah kasumbi producing with adnan abbas on guitars. that's the formula and he should stick to it imo

hasan raheem stans trying so hard to like the new album pic.twitter.com/NwyHplshyb

You’re the peanut to my butter… pic.twitter.com/eOVzM9qt7H

Personally, we find the songs to be pretty groovy and it appears we’ll grow to like them more over time.
What about you?