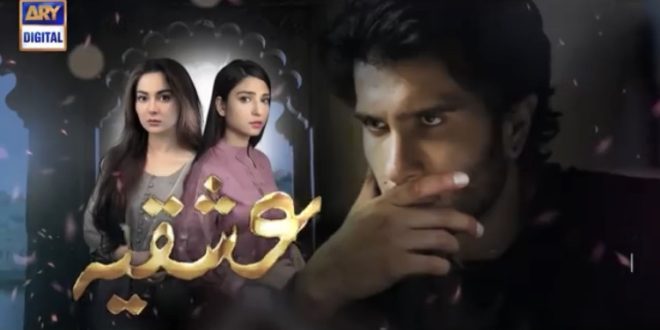 Directed by Badar Mahmood and penned down by Mohsin Ali, ‘Ishqiya’ is all set to grace television screens featuring Hania Amir and Feroze Khan in lead roles. The story line centers a love triangle which seemingly buds from college days between two individuals: Hmaza (played by Feroze Khan) and Hamna (played by Ramsha Khan) – as shown in the the scenes from the very first teaser. However in the second teaser, Hania Amir who is playing the role of Roomi, is in a conversation with Ramsha Khan is heard calling out her sister for being unfair and cruel which brings us to the anticipation that perhaps, the love triangle features a set of sisters.

The OST of the drama serial is sung and composed by none other than the talented Asim Azhar.

Watch the intriguing teasers of the drama serial below:

This drama is produced by Fahad Mustafa and Dr Ali Kazmi under the banner of Big Bang Productions. The cast also features Gohar Raheed in a prominent role. Fans are ecstatic to see Feroze Khan return to the screen after Mehreen Jabbar’s Dil Kiya Karey along with Yumna Zaidi and Mirza Zain Baig.

Are you looking forward to watching Feroze Khan and Hania Amir pair up for the first time? Let us know by dropping a comment on our Instagram page!