A one on one with the maestro himself 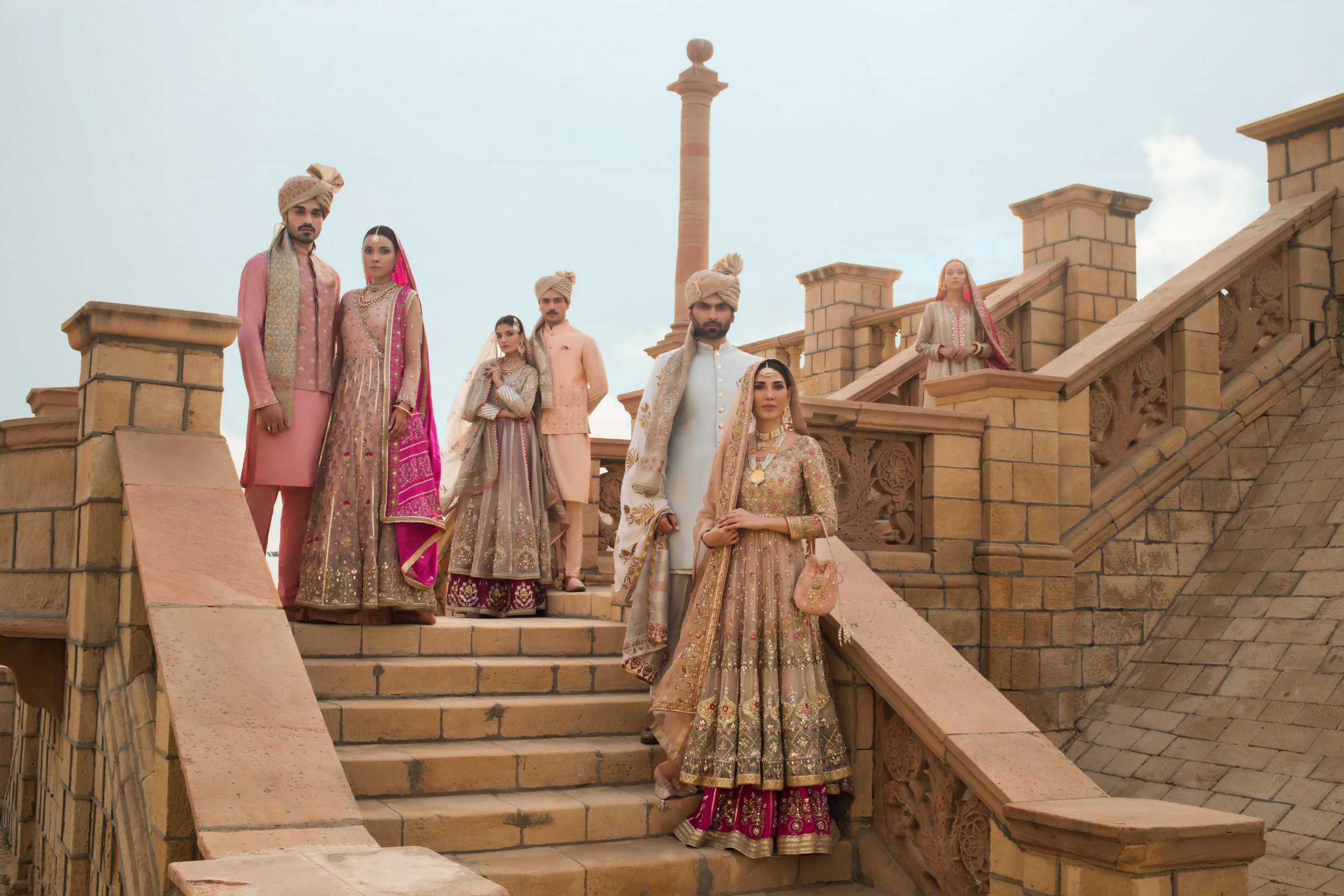 Deepak Perwani is a name to reckon with and we’re all well aware of that. The designer keeps on soaring as his work continues to outshine and break barriers. We get a chance to have an exclusive tête-à-tête with him. Scroll down to have a look.

How did you start off in the fashion industry? What inspired you?
I was always a very fashionable child. I was sent off at the age of seventeen to New York, so when I came back I had a fantastic sense of fashion. I used to work at a buying house in those days, selling Pakistani garments to the American market; we used to have a garment factory and sell to Macy’s, Conway, A&S, Lazoff Brothers, and many other brands. So I had a very astute sense of fashion from a very young age, plus my mother used to do clothes, and we were a very fashionable house always, she was and still is a very stylish woman and I think she was a great inspiration. When I came back to Pakistan I felt there was no ‘fashion’ as such, the men’s fashion was nonexistent and boring, and the women’s fashion was kind-of missing what I call a ‘sexy je ne sais quoi’ – and what did Deepak Perwani do? He brought ‘sexy’ back into fashion.

The name ‘Deepak Perwani’ is synonymous with luxury and couture now but was it a hard journey making this brand?
I believe any journey is hard and a fashion designer’s journey is harder than anybody else’s because you’re forcing your design, your design philosophy and expecting someone else to wear that vision or those clothes. Yes, my journey had its turmoil and turbulence, my father really did not think I should become a fashion designer. Those were different times in 1994, I was very scared of putting my own name on my shop, I didn’t know how people would react to a Hindu name to be honest. Till now I keep on racing forward but can people really deal with Deepak Perwani or his success? That’s a question I would ask people I guess.

What are the three things you get inspired by?
Architecture inspires me always, history and strong, opinionated, powerful, individual women. 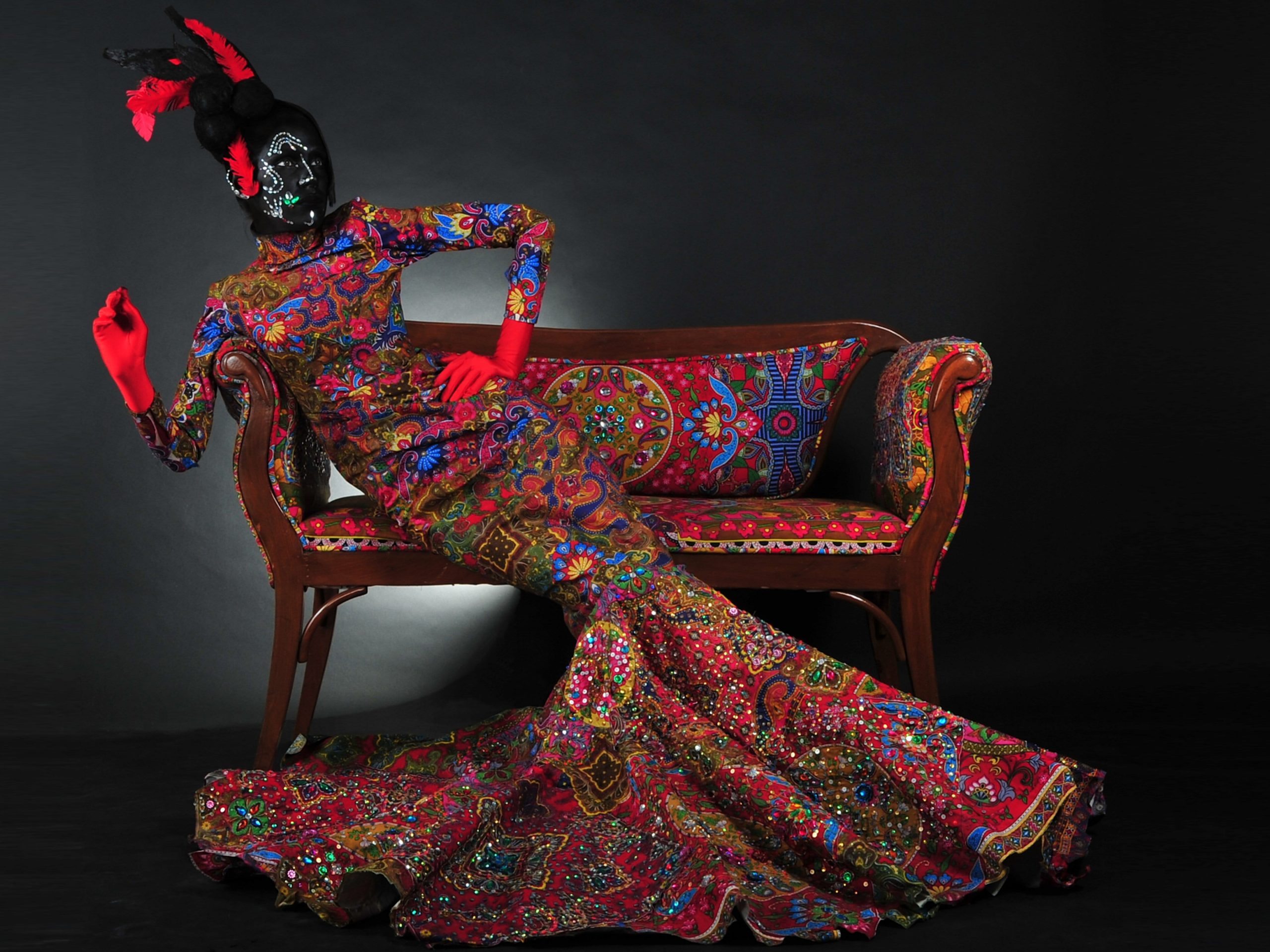 What made you take up the helm at Fashion Pakistan Week (FPW) and then leave after your term as we hear they wanted you back?
We made the Fashion Pakistan Council about thirteen years ago and it was to promote fashion, to take fashion forward. We were a bunch of designers who were very successful in our own businesses, our own field, and we felt that the pot was too small; for an industry to grow, a fashion week should come up so that was the whole idea behind the Fashion Pakistan Council. I’ve been involved with it for thirteen years, my tenure finished about two years ago, pre-covid, and yes they’ve asked me to come back but I’m really not interested, I feel I’ve given my due as a fashion designer and paid my dues many times over compared to other designers who work in this industry. As far as I’m concerned, I’ve been an integral part of building what Fashion Pakistan is today and I think that’s enough as far as my contribution is concerned, and of course, the contribution will continue but it doesn’t have to continue through the Fashion Pakistan Council, it can continue through charity work, projects that I do, individuals that I help and other brands that I advise.

You come with a legacy built over the years but now seem to have taken a more resigned position as far as the social scene is concerned?
I’m still very social and out there, you just don’t get to see too much of me because I’ve always been a private person, I’m not somebody who posts his holiday pictures or his pictures in a car, pictures on a road or what he’s eating, that’s me, I’ve always been very private. As far as the social part is concerned, I’m extremely social, always have been and always will be. I’ve never really hung out with the fashion or the film crowd as such, I’ve always had my own friends and my own social circle, and those pictures are never going to get posted so you guys will not get to see me as such. What you saw of me in the last decade had a lot more to do with the Fashion Pakistan Council and my obligations as a Board Member, Chairperson and as a Creative Director for Fashion Pakistan Week; I was required to go out a lot, to present myself, to sit in those front rows, I was required to be there because it was a part of my duty. Those duties are over and Mr. Perwani goes back into where he was, in his own world, where he’s always lived and inspired other people.

What do you think about the current trend for every brand to dress celebrities?
The trend of dressing celebrities or stars, musicians and icons has been there since fashion was created. It is one of the mediums we use to project ourselves and our project our brands, it’s a massive, heavy part of marketing, whether it’s Givenchy with Audrey Hepburn, Jean Paul Gaultier with Madonna, Deepak Perwani with many people to speak of; not just Deepak Perwani but all the designers in the world. It works when you put your clothes on celebrities, and they’re out there creating that symbiotic relationship with you. 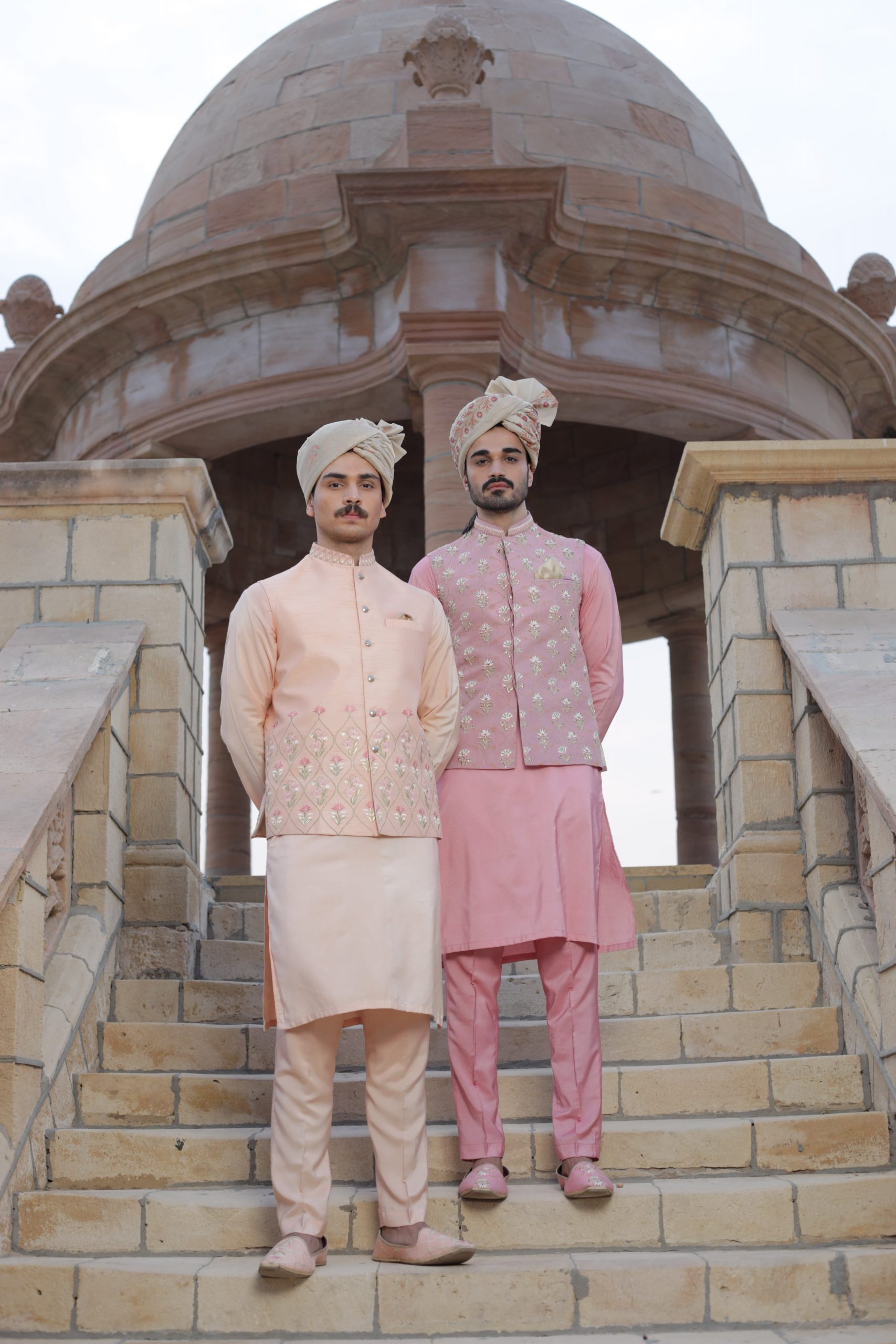 How much trouble does your quick wit and honesty get you into in our fashion industry?
Well, I’ll say two things about this question, you can either be with the crowd or you can stand out on your own, and I’ve always been somebody who stood out on their own, I think maybe it’s a Capricorn trait, it will always be like that. As for honesty and wit, not many people like people who are honest, it’s easier and safer to mix in and praise everyone. At the end of the day the person who really wins the game is the one who was honest, and it just takes time for people to understand that, that’s all. What do they say, ‘Chamche toh bohot hote hain aur unke saath kaante bhi bohot aate hain’, that’s all I’m going to say.

You have frequently travelled all over the world but we don’t get to see pictures, are you a very private person?
Yes, I’ve traveled extensively all over the world in the last thirty years but do I post my pictures? Very rarely, I think some things should be kept private and that’s the way it is with me. Social media has allowed people access into your lives and into your worlds, but some people like to keep their lives private – I’m one of them. I’m really not interested in you knowing where I went, what I did or where I had a great time.
Do you think fashion exists in its true sense in Pakistan and is it progressing?
I think fashion completely exists in Pakistan, the last thirteen years have seen a burst of fashion from malls, to retail outlets, to more presence, export companies into the domestic market, Spring/Summer, Fall/ Winter sales, Father’s Day, Mother’s Day, Black Friday, White Friday, I mean this is all fashion. Somehow in Pakistan we tend to look at fashion more negatively, which is something I don’t understand at all because people don’t realize that the moment they get up in the morning and put on that outfit and look at themselves in the mirror – that outfit is actually reflecting them for that day, and that really is what that is, it’s fashion! You might think that the takna shalwar, orange pagdi and the awaami suit is just ‘normal’ – nothing is normal, it’s all fashion. Is it progressing, yes it’s progressing. Is it dynamic? That is a question the designer should answer themselves, see their collections and see what they are churning out – is it commercial stuff or is it creative because if it’s creative only then fashion goes forward. 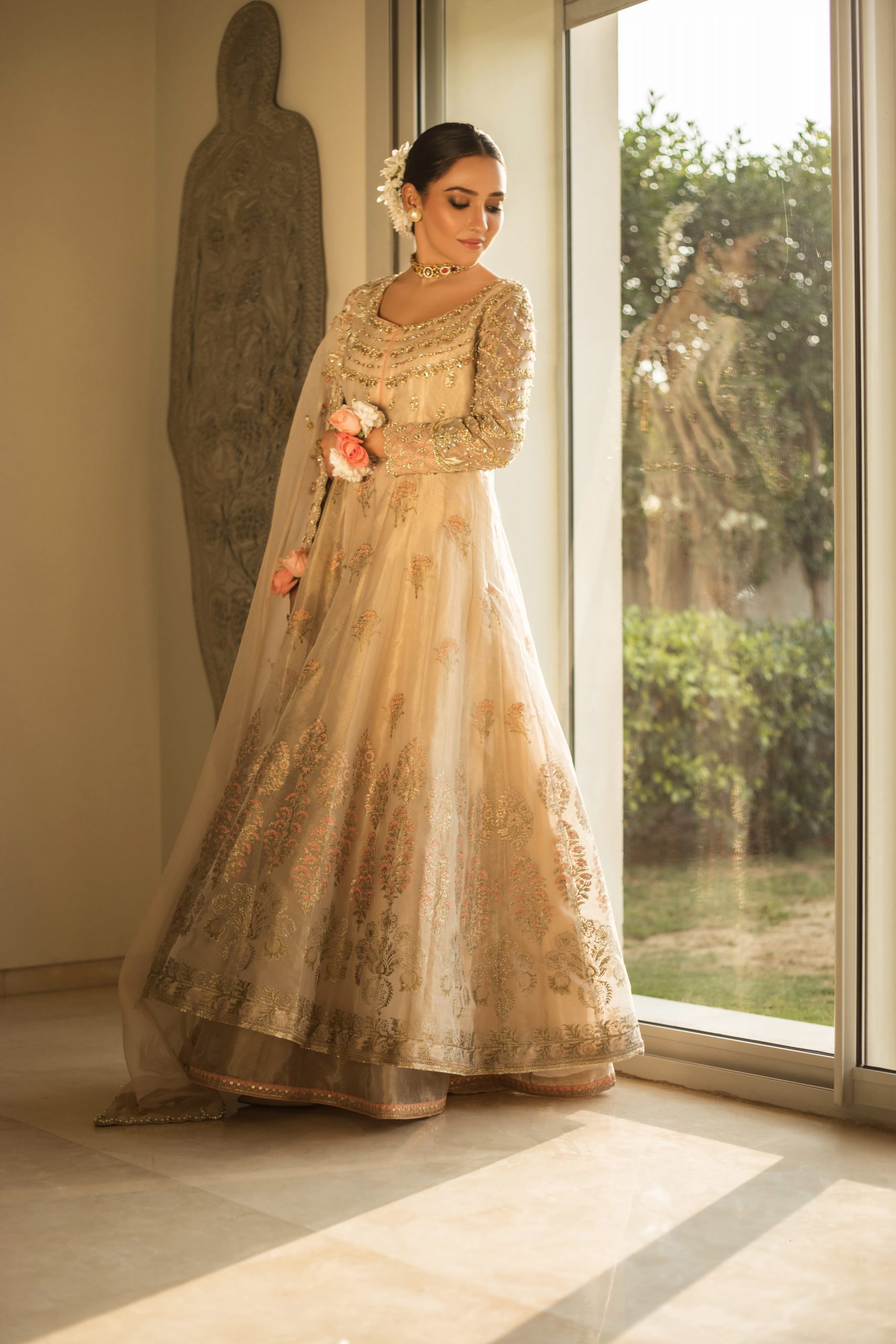 In COVID times we saw print media shutting down, what do you think of the all digital models?
We didn’t just see print media shutting down during Covid times, the demise of print media has been happening subsequently, since the creation of the internet and the ‘online’. That’s an example for the New York Times, The Herald, and many other newspapers also, who have had financial difficulties because of online media. As far as fashion is concerned it’s not about fashion, it’s about the information that is on social media that we are now absorbing so much that do we actually remember what we saw five minutes ago? That’s the amount of information that is available. The change that has happened from print to electronic was bound to happen, you’ve walked into the 21st Century, eventually people will find other avenues to project themselves, and if those avenues have become monitory avenues so be it. That really is the future – it’s all online. Clothes are online, sales are online so media is also online.

What message do you want to give out to all the young designers aspiring to start out?
My honest advice to all designers has always been to believe in yourself, have lots and lots of money because you’re buying the fabric, you’re cutting the fabric, manufacturing the garment, selling the garment, then you’re going out there and buying more, and you’re doing the marketing at the same time. So, if you want to get into this field you have to be patient and most importantly, you have to be individualistic, which means you’re so good that your style shows through. If you have an individual style and personality, your fashion will show through. It doesn’t need anybody’s accolades, people will gravitate towards you automatically and you will become a star if you really have it, it’s as simple as that. You can say it’s easy to spoon, but with spoons come knives and forks as well.

Besides fashion you’ve done a lot of music videos and been actively involved in films as well. How is that as an experience? And what about you as an actor?
Yes, we’ve done over two hundred music videos, I can’t even remember them anymore! The iconic ones are Na Re Na by Ali Azmat, Khamaj by Fuzön, Behti Naar by Rushk, Awaz’s Mr. Fraudiay, Ali Zafar’s Channo and Rangeen, and Chup by Zeb and Haniya. For films, Masha’Allah things have been good, we’ve done three blockbusters from Jawani Phir Nahi Aani to Punjab Nahi Jaungi and Baaji. Other music videos include Akhiyan, directed by Jami, Pal Do Pal by Najam Sheraz, also directed by Jami. A lot of Jami’s and Saqib Malik’s work has been done by us.

You were awarded the Sixth Best Designer in the world by the European Fashion Council, how was that as a feeling?
It was a great, fantastic experience. There was a reception hosted for me at the Bulgarian National Museum. The Pakistani Ambassador, Mr. Jamshed Iftikhar, was there with the European Fashion Council, presenting me with their award. It was a momentous occasion, not just for me but for the entire country. Did I ever expect that a designer from Pakistan is going to get such an accolade? No, it is kind of inspiring, I would say, even better than international brands copying you. 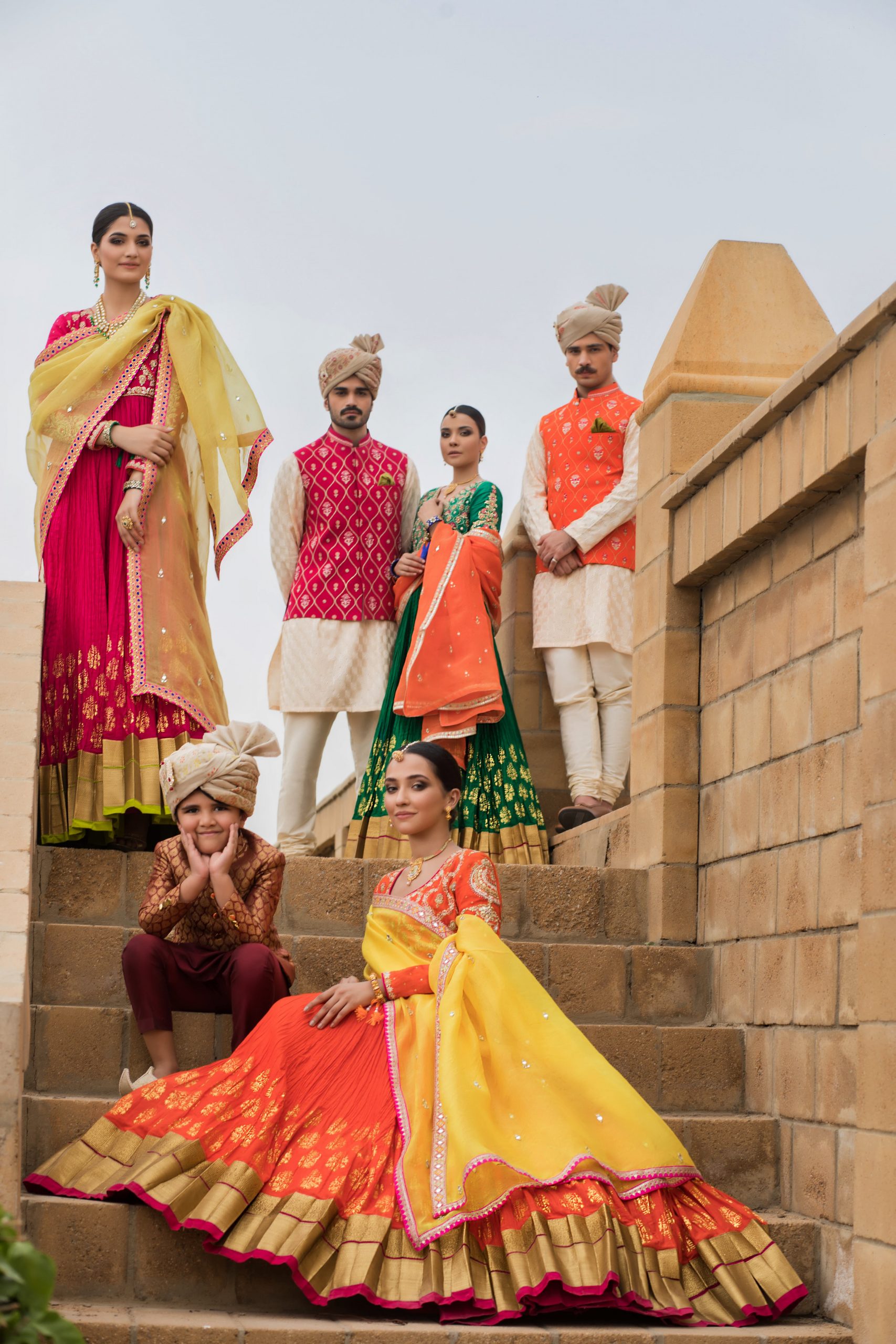