In the social media delirium of exposing one and other, the general public gets thrown off as to who to believe. In this mayhem it could be confusing and misleading to the point where you decide not to have an opinion about the matter at all. But hasn’t that always been the case?

In our human history, the matter of proving someone guilty hasn’t been an easy job, with or without proofs. However God must have seen it coming, and that’s probably why we were given reasoning; the human ability to weigh evidence and their environment and formulate a calculated judgment. As Aristotle says; ‘It is the mark of an educated mind to be able to entertain a thought without accepting it’.

A few days ago screenshots and messages had been circulating on social media showcasing the inappropriate behavior of Pakistani YouTuber Umar Khan, also known as “Ukhano.”  Screenshots and conversation of him have been flooding in from everywhere, with a common, underlying sexual tone.  A number of women have accused the influencer, who has about 270,000 subscribers on his YouTube channel, of making them uncomfortable and sending them unnecessarily sexual messages on multiple forums.

With the previous video deleted on the account of being too emotional and unprepared, comes a new video from Ukhano, trying to defend his case, this time fully prepared:

A few pointers from the video:

The flirting was consensual, the conversations were done in private, Most of the messages are fake conversations with hidden identities and it is easy to defame someone who’s risen to prominence and the matter should be take to court. And ofcourse there is an apology in the end for unintentional harm or discomfort from his side. Taking ‘both sides’ into consideration lets recap the conversation noted as “consensual flirting” and other factors into account. 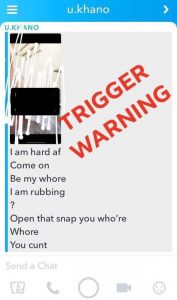 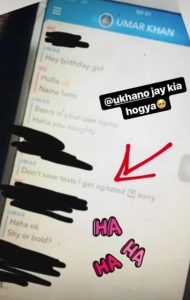 We apologize to our readers for the graphic language in these posts, however these must have passed everyone’s eyes by now.

Apart from these, celebrities and models have also shared their opinion and experience on the matter; 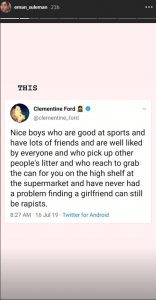 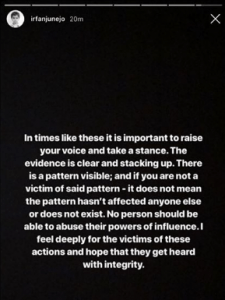 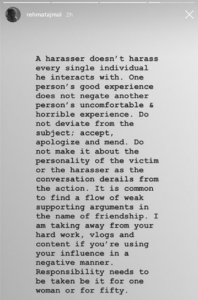 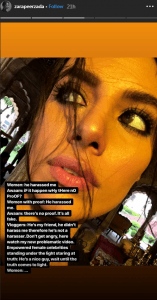 With these experiences shared, its fair to say that the entire dynamic of being a social media celebrity or interacting with one on a virtual platform, takes ‘private conversations’ out of the equation for them. For Ukhano to indulge into these conversations gives the alleged victims the right and opportunity to make them public as their defense just as He uses his influential platform to voice his story. Therefore these conversations cannot be considered private. Which is why they have been circulating in the first place.

Respecting all evidence and statements, we believe everyone has the right to share their thoughts and experiences without feeling threatened or intimidated. Denying people who lack the same influence, a voice, especially women has been a mistake the world is still suffering through. We are so quick to accept anything and everything Influencers give good or bad reviews for, however we are repulsed by the thought of the general public to use the same platforms sharing their experiences, bringing their desperate need to be famous into account.

Every dire situation calls for lessons to be learned, lets not silence people for having uncomfortable experiences no matter how famous the person and harmless they may seem, lets allow important matters to be expressed on the same platform where brainless consumption of products and content is conducted 24/7.