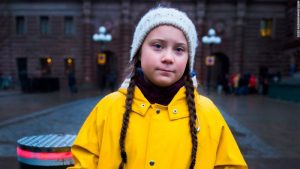 “We cannot solve a crisis without treating it as a crisis “
These words were spoken with remarkable enthusiasm and subtle notes of anger at the UN this summer by a 16 year old girl from Sweden. The girl ?
Greta Thunberg.

In the early days of March , Greta Thunberg became an internet sensation. It wasn’t because she posted a cringy dance video or wore a dress that was too trashy , it was because Greta ; a 16 year old had been on a strike for climate change.

This little girls utter determination to try and stop the greatest threat humanity has ever faced set off a global youth environmental strike – invoking students all over the world to diss their school and join her in an attempt to save the world.

Greta sat outside the Swedish parliament before and during the elections. Skipping school in order to protest against the inaction on climate change – by September the the protests had reached 135 countries and gathered enough support globally for the UN to take a stern stance on the crippling environmental emergency.

Now after months the strike has reached Pakistan with an estimated 3000 people marching the streets of Lahore and Islamabad yesterday.
The March that has been organized by the public and people at Climate action Now-Pakistan, had people from all walks of life strutting to invoke the government to take valid measures to advocate and promote necessary steps for the betterment of our environment. 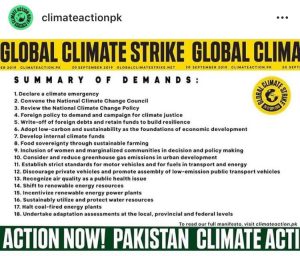 Here’s a look at some pictures from yesterdays march.

Zartaj Gul Wazir ( Minister of state for climate change of Pakistan) also attended the march but what followed was a string of controversy – the member of the PTI core committee blatantly hijacked the processions while posting on her social that the March was in fact organized by her – this however left the public furious.

People were furious and took to Instagram to clarify the entire situation.